The general election left the future of many spring Budget announcements up in the air, but that situation may soon change.

When Theresa May announced her snap election in April, it threw a major spanner in the previous month’s Budget. There was no time to pass the 776 pages of Finance Bill before parliament shut down. The result was that about 80% of the Bill was removed and its uncontroversial residue passed through parliament in a few days. At the time it was anticipated that following the election the Chancellor – not necessarily Mr Hammond – would reveal a Summer Budget, just as his predecessor did in 2015. The second Budget of the year was expected to reinstate the lost measures and add a few more that were best left until after the polls closed.

It did not quite work out that way, as we all know. Mr Hammond has remained in place at 11 Downing Street and in June told Andrew Marr “…there’s not going to be a sort of summer Budget or anything like that, there will be a regular Budget in November as we had always planned…”. Shortly after that appearance, the background notes to the Queen’s Speech revealed that there would indeed be a Summer Finance Bill, even if there was no Budget.

The new Bill will incorporate “a range of tax measures including those to tackle avoidance”, but precisely what those measures will be or when the Bill will emerge is unclear. The Treasury has a record of stretching seasonal limits when it comes to publications and will not be helped by the parliamentary timetable, which arrives at the summer recess on 20 July. Parliament resumes on 5 September, but only for nine days before the conference recess, which runs until 8 October.

One planned-and-abandoned/deferred measure which could be relevant to you is the reduction in the money purchase annual allowance. This generally operates when pension contributions are being made at the same time as benefits are (or have been) being drawn. If you think this might affect you, it is vital you check the current situation with us before taking any action.

The value of tax reliefs depends on your individual circumstances. Tax laws can change. The Financial Conduct Authority does not regulate tax advice.

China-listed shares are finally to be included in the leading emerging markets index.

China has the world’s second largest equity market, but at present shares listed on the Chinese stock exchanges don’t figure in the MSCI Emerging Markets Index. The MSCI index is the most important equity index for emerging markets, with an estimated $1,600 billion of funds using it as a benchmark. While the index already has a 28% China weighting, this relates to Chinese companies listed on stock exchanges outside China, notably Hong Kong and in the United States.

For each of the last three years, MSCI has reviewed whether conditions in the Chinese stock markets were appropriate to warrant including shares listed on them in the emerging markets index. In 2014, 2015 and 2016 the answer was no. Various technical reasons were given and each time the Chinese authorities made adjustments in the hope that next year MSCI would change its mind. Last month, the answer finally switched to yes.

The change will not happen overnight: adding such a large market to an index in a single move would be too disruptive. Instead, MSCI has set out a gradual approach. In May next year, MSCI will add shares in the largest 222 listed Chinese companies to its index, with an initial 5% weighting. The weighting is expected to rise over time until it reaches the full 100%, at which point Chinese-listed shares will represent about 15% of the MSCI Emerging Markets Index and total Chinese content, including the existing non-China listings, will approach 45%. Other smaller Chinese listed companies may also be added in the future, further raising the Chinese exposure of the index.

MSCI’s decision has been widely seen as a coming of age for investment in China and, on some estimates, could produce $500 billion of inflows over the next five to ten years. If you want to increase your exposure to China ahead of that predicted rush, there are a variety of options available which we would be happy to discuss.

The value of your investment can go down as well as up and you may not get back the full amount you invested. Past performance is not a reliable indicator of future performance. Changes in the rates of exchange between currencies may cause your investment (and any income from them) to go down or up. Investing in shares should be regarded as a long-term investment and should fit in with your overall attitude to risk and financial circumstances. 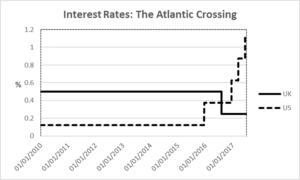 In June, the US central bank, the Federal Reserve, increased short term interest rates for the second time this year and the fourth time since December 2015. The 0.25% increase to 1.00% − 1.25% had been well signalled by Fed officials, so there was no surprise. As seems to be the case these days, the focus was more on whether the next rate rise was still three months away or might be deferred.

The day after the US interest rate decision it was the turn for the UK central bank, the Bank of England, to make its annoucement. This was universally expected to be another “no change”, leaving base rate at the 0.25% fixed amidst post-referendum concerns last August. The rate did remain unmoved, but there was nevertheless a major surprise: three out of the eight people charged with setting the rate voted for an increase. According to Reuters, this was the nearest the Bank has come to raising interest rates since 2007.

Does that mean the Bank’s next meeting might see the first rise in interest rates in a decade? The answer is probably no. One of the trio of rate risers will have left the Monetary Policy Committee by the time of the next meeting. Her replacement is thought to be less anxious to raise rates. A new deputy governor is also due to be appointed, bringing the Committee up to its normal quota of nine. The balance of the Committee is thus set to change.

Despite some apparent differences between the Bank’s governor, Mark Carney, and its chief economist, Andy Haldane, most experts still do not see the first base rate increase happening until 2018. That is good news if you have a variable rate mortgage, but bad news if you have a deposit account or cash ISA.

The value of your investment can go down as well as up and you may not get back the full amount you invested. Past performance is not a reliable indicator of future performance.

The May inflation data came as a surprise to many pundits. The expectation had been for inflation, as measured by the Consumer Prices Index (CPI), to remain at April’s level of 2.7%. Instead, National Statistics revealed that annual inflation had reached 2.9% (3.7% on the Retail Prices Index yardstick). 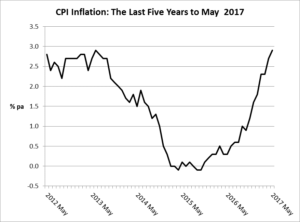 The last time inflation was at this level was June 2013, as the graph shows. Since then it has taken a rollercoaster ride to around zero for much of 2015, only to surge upwards in the past year: in May 2016 CPI inflation was just 0.3%.

At 2.9%, inflation is already above where the Bank of England had been expecting it to peak later this year. If the rate adds another 0.2% next month, then Mark Carney, the Bank’s Governor, will have to write a letter to the Chancellor explaining why the inflation target has been missed by more than 1%. It’s already clear what he would say from statements issued recently by the Bank: blame the fall in sterling since the Brexit vote.

The Bank sees little respite in the short term. In the press release issued in June alongside its interest rate decision, the Bank said inflation “is likely to remain above the target for an extended period as sterling’s depreciation continues to feed through into the prices of consumer goods and services”.

With many deposit accounts paying interest rates of under 1% (before tax), the news on inflation is a wake-up call if you’re holding more cash than you need to. A year ago money on deposit was just about keeping pace with price increases, whereas now it’s losing buying power at the rate of about 2% a year. To discuss your options in the renewed battle against inflation, please talk to us.

The value of your investment can go down as well as up and you may not get back the full amount you invested. Past performance is not a reliable indicator of future performance. Investing in shares should be regarded as a long-term investment and should fit in with your overall attitude to risk and financial circumstances.

The Fourth of July marks Independence Day in the US, where they celebrate the overthrow of the King and the birth of a new and modern democracy, with ‘justice and liberty for all’. I wonder whether this year will see half the country celebrating more enthusiastically than ever and the other half wondering whether they are returning to monarchic rule.

That aside, the date and the name got me thinking about what we do for our clients, as independence is an important goal for many and we take great pride in helping people achieve this. Independence can come in many forms, from helping clients retire early to rid themselves of the stressful job they have grown weary of, to helping those achieve a comfortable and enjoyable retirement where they are free from worries that their money will run out, to something in between, helping a business owner become independently wealthy from their company so that they can step away from work any time they wish.

We are only able to achieve this through careful, meticulous, long term planning. It starts at our very first meeting where we identify what is most important to you and can then take many years to come to fruition. We work with you over this period to ensure you are on track and if the goal of independence changes, we amend your plan and the path accordingly.

If you or someone you know is looking for independence of some form, please contact us and we will be delighted to help.

We use cookies to ensure that we give you the best experience on our website. If you continue to use this site we will assume that you are happy with it.OkPrivacy policy